Urban3 was hired by the City of South Bend to perform a Cost of Service analysis. Our work examined how South Bend pays for its infrastructure at the parcel level. The net cost model reveals where parcels are either producing more revenue than they consume in infrastructure costs (net positive), or where they consume more in revenue than they produce (net negative). South Bend, like many midwestern cities, has been grappling with the effects of deindustrialization on the built environment.

While conventional wisdom points to macroeconomic trends as the source for South Bend’s economic issues. However, Urban3’s analysis found that like other US cities, South Bend had overbuilt low-density single-family housing, which rarely produces enough revenue to pay for its infrastructure. This fiscal imbalance became more profound as the city started to lose population. Urban3 also examined the fiscal value of stabilizing distressed, and increasingly vacant neighborhoods and the impact of dense infill projects.

South Bend has been very intentional about shaping their zoning ordinance to attract more revenue positive development. They started with making incremental changes to their code to:

These changes helped to streamline the development process while making infill development easier and more desirable. The overall guiding principles were simplification, concision, and clarity to make it straight forward for anyone to understand the rules of how to build in the City. This would make it easier for developers to comply and would attract developers who were the best fit for the type of development the City wanted. The City went even further to make infill development easier, by developing pre-approved, off-the-shelf plans for developers or anyone that was interested in infill. 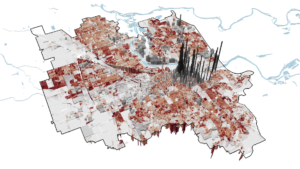 Eugene, OR
Schedule a call
Join Our Newsletter List