The City of Pittsburgh, in partnership with the Brookings Institution and economist Dag Detter, contracted Urban3 to perform a public asset valuation analysis. The City wanted to understand what financial opportunity lay within all public assets in the city. This analysis is based on the idea that municipalities can leverage their existing land holdings to improve community fiscal health and advance public policy goals. In Pittsburgh, publicly owned parcels with reasonable potential for development are shown in blue.

The goal of this type of analysis was not to suggest selling all publicly owned properties to the private sector, but to drive the conversation around the possibility of leveraging existing assets to further goals identified by the community. Urban3 took the next step and assembled an accurate dataset that identified which public entities own which parcels. Mapping the municipal assets was a significant challenge. The City did not have a clear understanding of publicly owned assets from a data perspective. Urban3 developed an analytic method to develop and map all public assets, and identify conflicts within datasets. The resulting model color codes parcels by ownership and extrudes them to a height to scale with the property’s value. 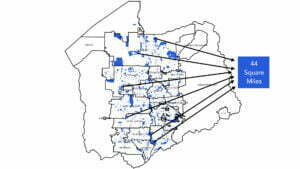